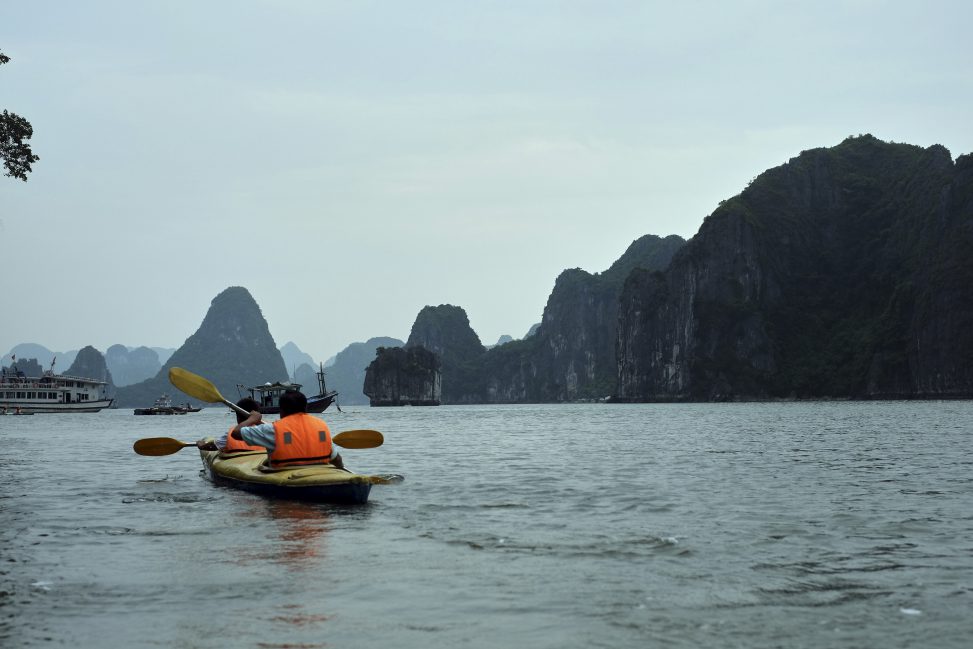 So 2015 was a poor year for my photography. For some reason after my trip to Thailand and India in Late 2014/ Early 2015, I put down my cameras and did not pick them up again until my trip to Vietnam in July of 2015. I cannot explain why happened and am conscious of the need to keep shooting since that experience.

So I picked Vietnam because J was able to join me and I didn’t need a second excuse to travel to another country. Vietnam was easy for J to travel to and easy for me to get a visa for ( a big deal if you are afflicted with an Indian Passport, as I am). For the trip I carried over my new camera (the Mamiya 645 Pro TL) and my trusty FM2n with a new 28mm lens (which is the best lens I have for that system). Unfortunately, We were greeted by a few surprises when we were planning our trip , they were:

We landed separately in Ho Chi Minh City (formerly Saigon) within 4 hours of each other. J was pretty miffed that that fee for an American to get a visa was more than twice as much the cost for an Indian to get a visa – still paying for that misadventure in the last century, I guess! A taxi ride took us to our first Hotel. The rooms were small and cramped and had no windows. But we figured that we wouldn’t be spending much time in the rooms anyway. The theme of having to compromise on accommodations was one that repeated itself over and over in our time there.

We got there in a period where there were rains on and off throughout our visit due to Cyclone Chan-Hom. This only added to the charm as far as I was concerned as it was reminiscent of India in the rains. The first day there, we managed to get a travel sim for mainly maps, data and translation and booked ourselves a trip for a river boat tour on the Mekong Delta for the next day which was not very expensive if memory serves right. We then went about exploring our whereabouts and decided, after an inexpensive meal of pho at a night market to go to the BitExco Tower and have a few drinks. Vietnam comes awake in the night as people go out to have food in the markets and nurse beers and coffee on little pavement cafes- a hangover from their French colonial days, I suppose. The night was cool and the views form the tower were spectacular, even though the bar was a bit loud for my tastes.

The day began early when we met a bus that took us to the Mekong river delta. I loaded the Mamiya up with Portra 400 and carried my trusty X-Pro1 for the trip. The Ferry took us to a village on the delta where they grew Honey. They showed us where the honey was grown and took us on a gondola trip through the village. The light was beautiful and I thought I got some stunning pictures. It was only later that I realize that I had messed up loading my film and ended up with no shots from my time in Vietnam.

We got treated to some honey tea and honey based snacks and the village tour ended (like any self respecting tour) through the gift shop where you could buy the stuff you saw. Next up we went across the delta to another village where we were treated to a lovely musical by four generations of one family and had traditional Vietnamese lunch. This was a bit poignant and sad because the whole thing had the feel of a circus. The artists were talented but the tourists were oblivious, boorish and more interested in their phones that the music.

Among other memories of Ho Chi Minh City:

We enjoyed Ho Chi Minh city and against all advice took the train to Hanoi – this was the correct decision. Not only was this J’s first train journey, the route was beautiful with spectacular views through heavily forested hill passes overlooking beautiful sea views. We passed the countryside and spied on people in little towns going about their lives, on children pacing alongside in their cycles while waving at the train- a scene I have witness in train journeys in India. Along the way, we saw the famous rice paddies with little graves and shrines to their ancestors with flowers and incense offerings.

Once we got to Hanoi, it was a entirely different Vietnam on show. The city of Hanoi was the capital of the communist north during the war but miraculously escaped heavy damage in the fighting, as a result, the city, especially around the old quarter was beautifully preserved and showing full evidence of its French Colonial history. Narrow tree lined bylanes and quite sleepy neighborhoods were a feature of our time in Hanoi.The city had a very different feel to it and appealed more to both J and I. We visited Ho Chi Minh’s mausoleum and learned more about this extraordinary leader of not one but two struggles.

We also visited the War Museum, which had a different view on Vietnam war than the western one which we were acquainted with. It was there that we , J included, learned about the indiscriminate use of Agent Orange in the war and the long lasting effects on the land of Vietnam and its people. The boorish nature of tourists and natives alike was evident in how people were more keen on getting a good selfie than learning history.

From our base in Ho Chi Minh, we booked a tour for Halong bay- 3 hour journey. Unfortunately, in our time there, while there was no rain, the depression from the cyclone had left its mark in cloudy skies and gloomy weather. We had breakfast on the boat (included in the tour price) and kayaked for about an hour in a sheltered lagoon. We were left wondering how much better it would have been had the weather gods smiled on us.

In summary, my thoughts on our time in Vietnam is mixed. I loved the food -pho, bahn , hot pots and endless cups of lovely coffee. Loved watching life go by over yet another cup of coffee or cold beer from a small stool in the pavement outside a street cafe. Adored the architecture -both the colonial and new. I also grew nostalgic from the old tree lined streets and a sedate, leisurely reminiscent of Dadar or my own Vile Parle of a bygone era.

What was surprising and disappointing to me, was the coldness in the people -the lack of curiosity about your visitor and the unsmiling grimness of the people. One particular experience sums this up well. I was out one morning after fresh rains taking pictures and exploring around Ho Chi Minh city and came across a coffee vendor on a bicycle. Ever eager to interact with the locals and get an authentic food experience, I tried to secure a cuppa only to be shooed away (much to my amazement) when they realized after one attempt that communication will be difficult. I hope my experience is an outlier and not a result of the scarring of a nations psyche by decades of endless wars. Here is wishing that I get to go back and see Vietnam again and be proven wrong.