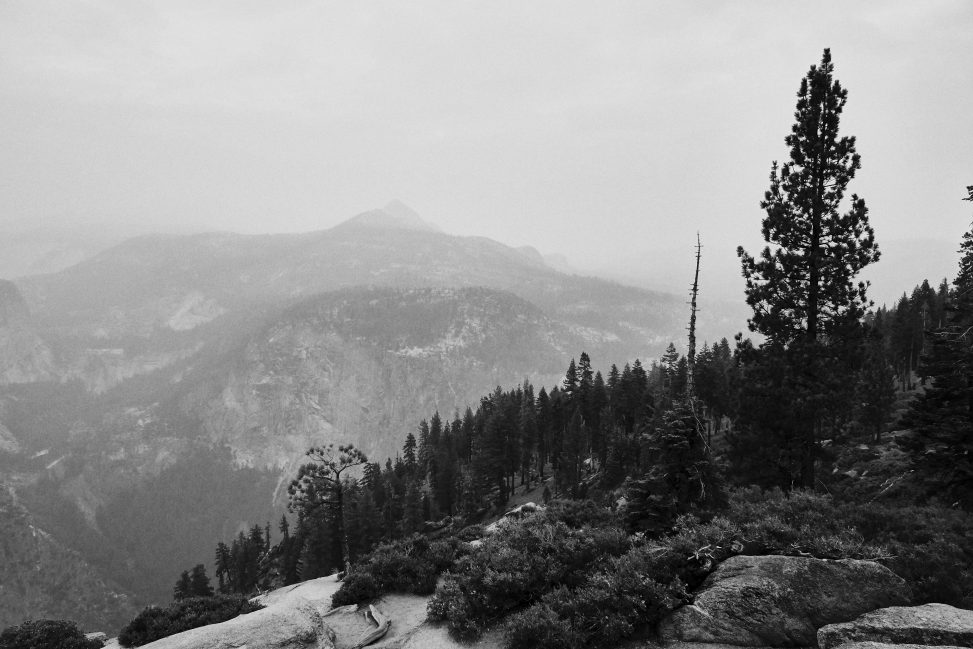 It was 2015 before my parents were finally motivated enough to come and join me in the USA. It was the impending threat of me disowning them that finally got them around to it. They were there for a 8 or 9 weeks and we traveled around a lot, Raleigh and the Blue Ridge Mountains, Chicago, KC, SF and Yosemite. While I didn’t see the trip as an opportunity for photography, I did want to take pictures in Yosemite. Alongside, I was considering a camera upgrade to my Fuji X-Pro1, so I ended up renting a Fuji XT1 from camerarentals.com (which was a good experience).

So everything that could go wrong in this trip did. I was unfamiliar with the new camera and missed shots because of that, California was having a bad fire season as we showed up and all of Yosemite was blanketed in haze from a fire in the northern part of the state. Here is an image showing the extant of the smoke from the fires from the wikipedia article.

P and S hosted us graciously as always and my mother and S got on very well. There was as always some friction between my father and myself and Yosemite was the end of a long trip putting both of us on edge. On P’s suggestion, we stayed at Tenaya Lodge, which was the closest accommodation on the edge of the Park without actually staying in it. The Lodge was quite expensive but the facilities were good and the convenient access to the park was nice.

So to recount, new camera-no clue about the right setup for my style of shooting, general bad temper, no backup analog camera. Not proud of the images, which were all shot in .jpg- no room to edit. However, here they are-

Needless to say, a revisit to Yosemite is warranted. Hopefully, the lessons of last time will lead to better preparation and outcomes will be less disappointing.